One of the fastest growing eCommerce companies in Australia is Koala and if you’ve been following our content, you’ll know we did an in-depth audit on how they grew their revenue from zero to $13 million in their first 12 months through a pretty impressive marketing strategy (see the 16 takeaways from that article here).

Successful growth teams never sit still and in the now very competitive mattress-in-a-box market we knew that for Koala to stay ahead as the market leader they must be experimenting with new growth ideas, tools and tactics and scaling up all the winning ones.

So a year later i’ve taken a look at 5 new tactics that Koala is using to successfully grow.

You’ll notice as I go through these tactics that each one of them is focused on awareness. That’s because, as an advanced marketing team, they’ve already spent significant resources fine-tuning each step of their funnel. Now, it’s at a stage where just getting someone to their site will kick off remarketing and a range of other tactics to move them further down the funnel to the eventual purchase and beyond.

Right, let’s get into it.

If you’ve logged into Instagram in the past few months you have probably seen an influencer you’re following sharing a photo or video of themselves unboxing a Koala mattress, or jumping up and down on it with a wine glass at the other end. This is not by chance.

Koala have moved into influencer marketing in a big way.

Their strategy is to target a range of micro-influencers: people who have a decent social media following — anything from 5,000 people to 700,000 — but who are not celebrities.

Each influencer creates their own content and they’re given a unique coupon code that their followers can use to get 15% off. As they’re showing themselves using the Koala product, the social-proof to their followers will be pretty convincing, and this should be work far better than ad campaigns.

From there I am guessing the influencers receive a commision, and Koala is tracking who their very best influencers are, so they can use them even more.

Some of the posts have over 100,000 views and hundreds of comments, which is impressive given organic reach on these networks is dropping.

In the 2018 calendar year their influencer marketing stats were:

If you want to do this for your own brand, check out Tribe which Koala may be using and which will allow you to tap into and manage the relationships with micro influencers.

Yes you heard me right, the digitally savvy growth team at Koala are now using Billboards to grow their brand. But rather than plastering well-designed photos of their beds around Australia they’re utilising billboards in a different, smarter way.

They’ve decided to be cheeky and take the piss out of competitors such as De Rucci and Ikea, their industry and even Clive Palmer. Their goal with these billboards is not to simply advertise to the people walking and driving past the billboards. It’s actually to drive PR and social sharing. 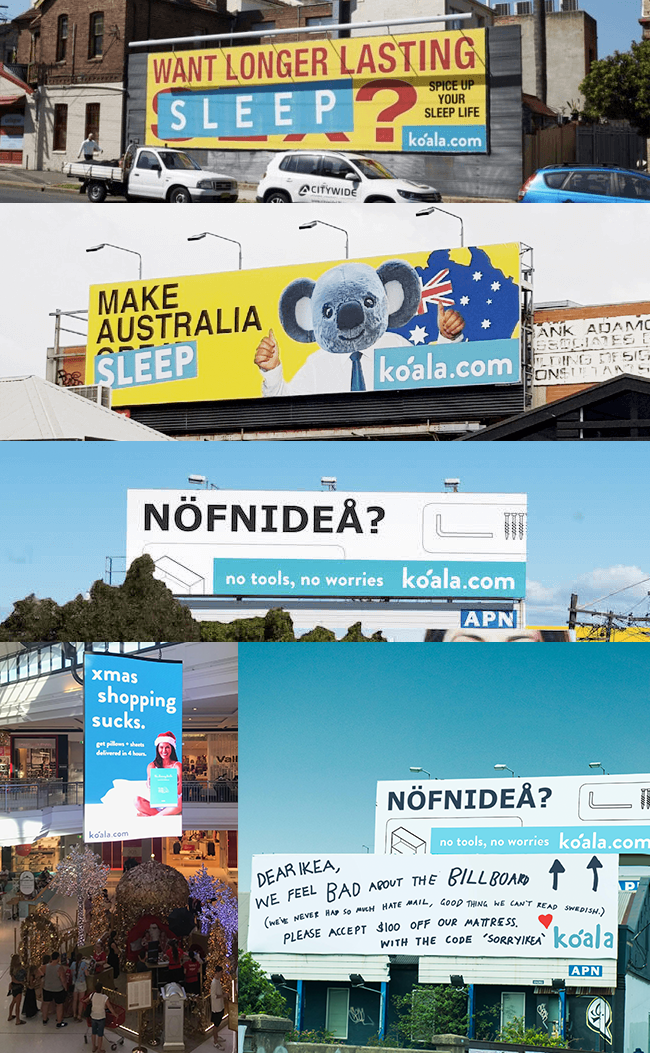 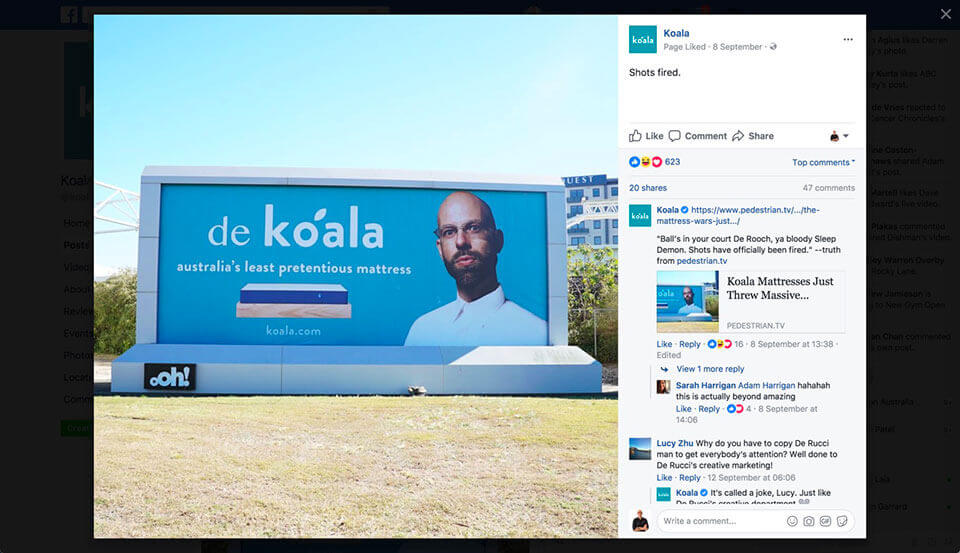 And here’s some of the PR they’ve got from this strategy:

It’s a pretty effective strategy. I’ve seen their billboards everywhere. Not in person, but online as they planned. I’ve also seen that Koala have expanded out to bus advertising now as well, so keep an eye out for some cheeky ads on buses in the future.

Koala have been using video marketing since they first launched. One of their initial videos of someone jumping on their mattress with a cup of red wine sitting on it went viral and helped to rapidly build their brand.

Recently, they have doubled down on their video advertising efforts by hiring their own full-time in-house producer and video editor. They run their video production and advertising like it’s a growth channel, with almost everything done in-house so they can rapidly come up with video ideas, execute them, post them, see if they work, tweak the video based on insights and then repost it and scale the winning ones on the platforms on which they perform best. They even use the ICE prioritisation method to decide which videos to create based on ranking each idea by impact, confidence and ease of implementation.

The type of videos they create range from koalas playing with pillows, someone surfing on a Koala bed-base to the Red Bull racing pit-crew team assembling their furniture in lightning speed. And of course, they have some normal product-focused videos as well. Here’s a few of my favourites:

To promote the videos, they are spending a lot on Youtube ads. In particular the six-second unskippable bumper ads. They are also spending on Facebook and have even moved offline and have started purchasing TV advertising, where they’re specifically buying ads in really high quality, large audience spots such as during MasterChef with the goal of these ads to get people to the website and into remarketing funnels.

One of the keys to Koala’s success in video marketing is that their creative team and their performance team work together on each of the projects so that things go live faster and the feedback-loop from customer to performance to creative is quicker, which leads to videos being improved rapidly.

To find out more about how Koala does creative check out this article by Charlie Gearside, creative director at Koala.

Another offline channel that Koala have been using to bring new customers into their online funnel is radio advertising. Not surprisingly they’ve done things a little bit differently to stick out from all the other radio ads that sound the same

Each radio ad that they create in-house follows these principles:

The result? A different sounding ad which is designed to stand out and get noticed.

They’ve also experimented with live-read ads which have done well. They essentially pay for radio presenters such as Kyle & Jackie-O to speak about their product for 30 seconds on-air. They give the presenters an interesting starting point, and then let them run wild speaking about whatever they like. If the presenters like the topic sometimes these ads go for minutes at no additional cost.

The last tactic Koala have utilised to grow is product expansion, with the launch of the Koala sofa. They built the new product with the learnings from their mattresses in mind. It’s an easy-to-assemble, good-looking sofa with four-hour delivery and the same 120-day money back guarantee that helped them sell mattresses. They already have 383 reviews on the product, with 98% of them 4 and 5 stars. It looks like they’re off to a great start. 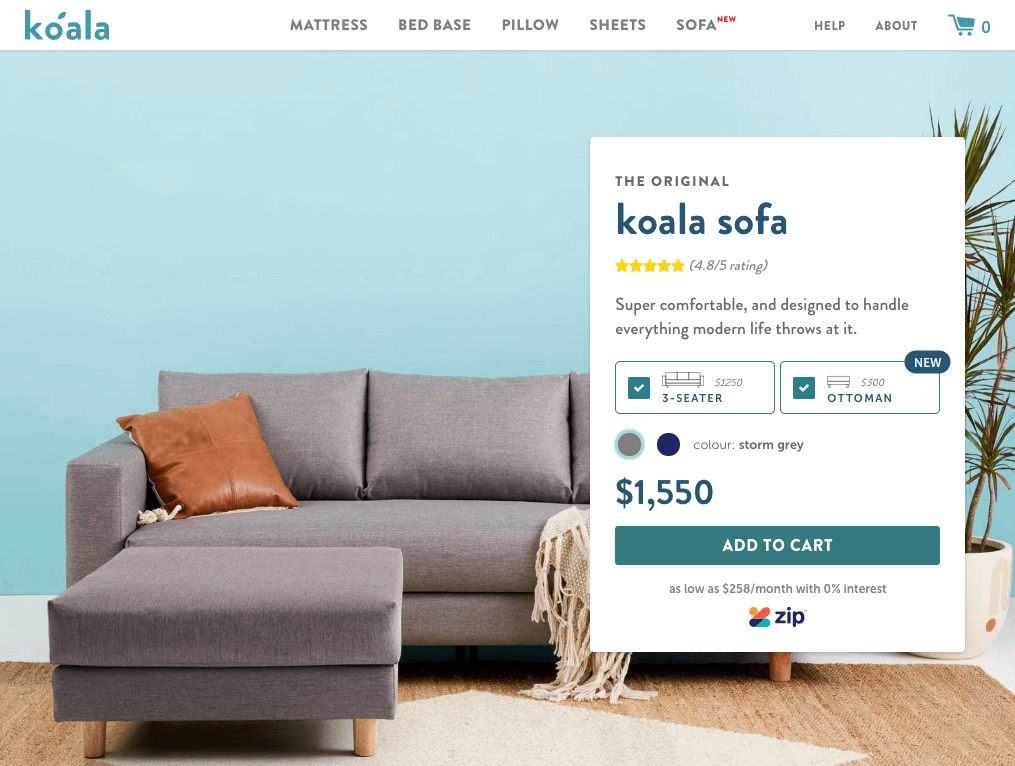 By moving into a new product area they will have new ways to cross-sell in both directions. They can also upsell to increase customer lifetime values which enables them to spend more on every customer acquisition.

Growth marketing is all about testing, so it’s no surprise to see Koala in the past year have launched, tested and scaled many growth ideas. There are plenty I can’t find, im sure. In a highly-competitive market such as the mattress-in-a-box industry, testing new creative methods of marketing and innovating on products is key to becoming or remaining the market leader. From what I can see of Koala’s growth marketing, there’s no stopping them anytime soon.